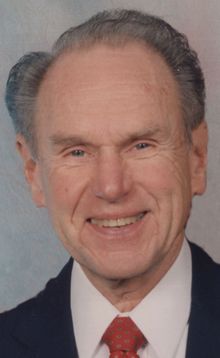 He was born August 9, 1921, in Carroll County, Ohio, to Warren and Vera (Marshall) Orwick and has resided in the vicinity since 1927.

Carl was a graduate of Alliance High School and Mount Union College, where he was a member of the Alpha Tau Omega Fraternity. He was employed as chairman of the board at McConnell Insurance Agency.

He was a member of Christ United Methodist Church, along with being a member of the YMCA, Kiwanis Club, Century Raiders at Mount Union College, American Legion, Veterans of Foreign Wars, former member of the Board of Directors at Charter One Bank and a Community Concert Committee member for a number of years.

A. U. S. Navy W.W.II veteran, Carl was the recipient of the WWII Victory Medal and American Theater Ribbon.

He was preceded in death by his parents.

A Memorial Service will be held at 2 p.m. Saturday, November 12, 2011 at Christ United Methodist Church with Rev. Karl Stonebraker officiating. Friends will be received following the service at the church. Private Interment will be at Fairmount Memorial Park.

Memorial contributions may be made to the Christ United Methodist Church, 470 East Broadway St. Alliance, Ohio 44601 or to the University of Mount Union, 1972 Clark Ave., Alliance, Ohio, 44601.

Via Cassaday-Turkle-Christian Funeral and Cremation Service